“In the end, it’s not the years in your life that count. It’s the life in your years.” – Abraham Lincoln

There’s a great movie from the early 90’s called Groundhog Day. In that movie the main character keeps reliving the same day over and over again. No matter what happens, he wakes up the next day and it’s the same day he just finished. He eventually realizes this and does all sorts of crazy things knowing it doesn’t matter until eventually he decides maybe he needs to make some changes in his life.

The point of that is to say that there are countless businesses and people out there whose life resembles the main character in that movie. They seem to just keep having the same day or month or year over and over and over again. A friend of mine refers to these as ‘Groundhog Years’, and he’s right. So many of us just keep doing the same things over and over again and pretty soon 10 years have gone by and everything’s the same.

Think about your business or your personal life. If I had met you ten years ago, disappeared for a decade, and then showed up today at your place of business, would I recognize everything? In too many cases, the answer would be yes.

So start a new year. Ask yourself what you really want your business or your personal life to look like one year from now. What would be different? If you had a magic wand and could change anything you wanted, what would that change look like? Can you draw a picture of the one-year-from-now you?

Now ask yourself what has to happen for that change to become a reality. Maybe there are only one or two things. Maybe there are a hundred. Regardless, think about what those things are. Now ask yourself, how many of those things could I get done in the next month? Maybe it’s just the first thing on the list. Maybe it’s two or three. But write down what you need to do between now and the end of February. Then give that list to somebody who’s willing to hold you accountable to it.

Maybe you can think further than 30 days out. No problem – what can you get done in the next 90 days? Write it down. Sign it. Give it to somebody who will hold you accountable to it. The point is that whatever change it is you want to make can be (and must be) broken into pieces, and you must start with the first piece.

So start with the first piece. Don’t wake up in 2019 or 2025 or 2040 and look around only to find that it still looks just like 2017. Start with one thing and get to work. No more groundhog years. Just real, meaningful, rewarding, life. 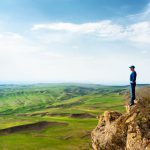 How Are You Scaring Yourself?Beliefs, Change