“And those who were seen dancing were thought to be insane by those who could not hear the music.” – Friedrich Nietzsche

I’ve used the above quote in this space before, maybe more than once. The older I get and the more people I meet, the more I want to get it printed on a t-shirt and wear it every day. I meet so many people who need to read it.

I don’t have any statistical data to tell me how many people are afraid to dance to their music, but it’s a lot of them. It might even be most of them (that’s really depressing). Whatever the number, there is a huge part of the population of our planet that doesn’t dance because they don’t want the non-hearers to think they’re insane. So they do whatever they think those non-hearers would approve of.

That’s no way to live. Every single person on this earth is here to do something. It’s different for everybody, and sometimes it’s hard to figure out what that thing is. It’s possible that thing changes over the course of your life, maybe more than once. The only thing I’m becoming sure of is that when you find whatever that thing is, and you do it relentlessly, your life is way better.

Think about your business or your career. Does it look like you want it to, or does it look like other people think it should look? Are you following your passion and your vision, or somebody else’s?

Don’t live somebody else’s life. Nobody ever lays on their death bed and says, “Boy, I’m glad I spent my whole life wanting to do something but instead just doing what a bunch of outsiders thought I should do.” When you find that thing – when you hear your music – dance. Dance as hard as you can. The people who think you’re insane can buzz off. Just keep dancing. 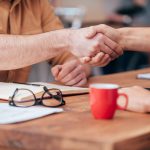 Look at All These Opportunities!Beliefs, Leaders
Belief Drives It AllBeliefs, Change, Leaders